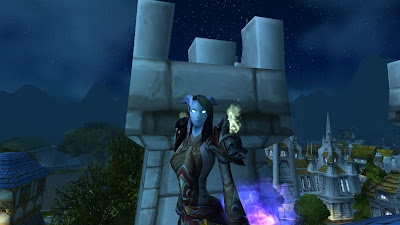 I originally rolled Kara with intent to heal, in those days way back when when nobody did leveling dungeons, with intent of leveling; because these were things you needed guild groups for - at least with the warrior I'd began my exploits into World of Warcraft with, I could reliably quest without feeling too squishy. But, I hadn't forgotten an interest in healing, and when I managed to bumble my way to level 55 and the ability to create a death knight: I promptly forgot about leveling a priest.

Two years later, in January of 2010, I convinced my better half to roll a character - and after a morning of installing, and updating and installing some more, a draenei paladin named Quaras was born.

We had done the "Recruit a Friend" program - and if we wanted the experience bonus, for both of us, we needed to play two characters together at level, and our character's stories began, because the joy of a blank template character is filling in the blanks for yourself: Quaras and Karanina had always been friends, had always traveled together - and this had become the reasons for a lot of things we chose to do, a lot of things early on that became bigger things later: our choice of spec, for example.

"Sometimes, the monsters go for you first," she spoke, hefting the shield from the ground, offering a familiar grin, "So, I'll be your shield and your sword. And I'll be your guardian and defender."

"Sometimes, you need to be protected from YOURSELF," the priest retorted, clutching her stave with two hands, frowning, "You have passion, I have discipline: So, I'll bend the light into your shield. I'll be your guardian, and your defender."

This was before the recruit a friend bonus took a character all the way to 80; and as such, we suddenly stood at level 60, and school picked up, and I'd pick up Kara and play a little; I'd heal a little and had fun. I'd use LFD and get a bit ahead, and then we'd quest a little more, and even out, and then it happened, because it does: I pulled ahead in levels, and kept going.

I was the manager of a dairy, at a national grocery chain. I had worked long hours, had invested much of myself into it's success. My dairy became me, my hopes, my dreams, my aspirations. I invested my creativity, my knowledge, my studies. It was what I had gone to college to learn how to do, it was practical application of everything I had learned, and everything I had studied, and it was everything I had ever been able to put in order.

I studied, and I learned management techniques because I loved them - I put programs and ideas into place. I championed procedures that have created inventory solidarity, and I had taken a nondescript dairy of a otherwise successful grocery store, and I made it one. The first year I was in control of said dairy, our annual sales creeped around $2 million dollars - the second, we were closer to $4 million.

I had talent, I had a knack for business, I had displayed the values and beliefs of a managerial candidate that could go far in a business and that threatens people in charge. Because sometimes, the idea of being replaced is terrifying, and the idea of replacing is pervasive and delicious to those coming up. I also had morals, I also had dedication to the people who worked for me, and when I had to make a very real choice, of standing up for the people who worked for me, or allowing a direct supervisor to continue to enforce ridiculous chain shifts on people, I fought for them, and I fought for them, and then I lost.

I threw myself pretty hard into a lot of self destructive things, and over a spring, a summer, a fall, I slowly picked myself up, put myself back together. I began raiding seriously, because unfettered from the commitments of a managerial schedule, I finally had time to do things like that. I could commit to regular runs. I looked for raiding guilds on Medivh that worked with my schedule - hard, being a west coast player on an east coast server, but not impossible.

Pre-Cataclysm was a weird time to find a guild. I'd joined one that raided for two weeks, that I had sat on the bench for four of their five raid nights, before they'd decided "We really don't want to raid anymore, we'll wait until Cataclysm releases." It was June. That guild didn't last much longer.

Eventually, I wound up in another guild, and stayed there the remainder of Wrath, a guild that led to the formation of Waypoint, if only to be what that guild wasn't: communicative. The guild split in five different groups, of people who had known and played games with each other since Everquest, and never spoke to each other in guild chat ever.

A fine upstanding member of the World of Warcraft twitter community had convinced me I could run my own guild, and I listened. I'm kind of gullible.

It was a time, where I needed someone to have faith in me, because I didn't have it in myself.

The notreally secret of Waypoint, is that I run it like I ran my business: everybody had a piece in it, and everybody mattered.

The truth is, I knew exactly what was going to happen with our holy paladin - he had been my raid leader, before Cataclysm. He had been my friend. And he was good at what he did, but if Waypoint was going to live, he had to change, or he had to leave. When he left, it would cripple our progression entirely.

The plan was simple, and it solved a lot of issues within Waypoint: We had a growing roster of DPS. Half of our raid was on the Vanquisher token.

And I made a decision to preserve the guild culture, to cut our nose to spite our faces. To be a guild made up of players who had been in heroic modes seriously, suddenly be spinning its wheels to get traction in a tier change.

Now, we needed another healer. There was Karanina. 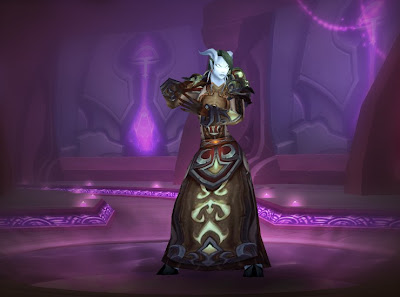 "Look at you, some sort of fancy one? Classy, you'd describe yourself, eh Princess? And what the fel do you think you can accomplish, when the Light is weaker than it's ever been?"

"You know you're writing about you, don't you?"

I didn't. I mean, I'd never suspected, but, I'd never thought to suspect.

Tier 12 was hard. Firelands, sure, Zul'Aman and Zul'Gurub, okay. But, it was a hard time for me, because I had to admit that I was struggling. We were a guild that fought for every progression kill, only for the next week to see us stuck back into the rut we were in, because reasons.

It felt every time we made progress, the next week we slid backwards, and that no matter how much gear we got, we weren't good enough.

I blamed a lot on myself. A lot more than I should have, honestly, because I had to learn to heal in a raid, but I was still uncertain of myself as a raid leader. It was August, when my insomnia started, when I started literally losing sleep over raiding in World of Warcraft, and despite our best EVERYTHING, we were 2/7 in the Firelands, prior to the nerfing of the raid.

I only had a single free day a week to do heroics, and I spent it by running the remade Zul'Gurub, and the retooled Zul'Aman. Repeatedly, over and over, until I could reach the valor point cap. Our tanks declared themselves "STORNG," but was "STUBRN."

The character, in my head, started to grow up, quietly. Where inexperience had stood, there was devotion to a cause. Where there had been an eager need to prove one's self, came an inner peace, a knowledge that I could slowly do well. Slowly.

"Your armor means nothing, your faith, even less..." 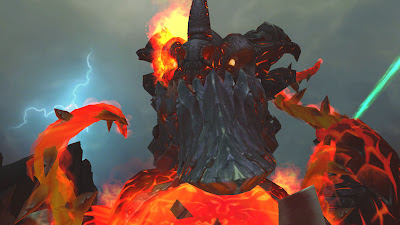 She bolted upright, her brow slick with sweat, her heart racing, the memory of the beast's bellowing cries. The intonations of the dead shouldn't echo, but in the dark, alone, she pulled the sheets over her a little tighter, curled a little closer, and prayed a little harder.

Deathwing's quote resonates with me. You might never hear it, over the sound of Mumble/Vent, over the sound effects of a raid group. But, it's a line that resonates, and it's pervasive, it instills doubt. That, in spite of you, you'll never overcome the terrors. If not Deathwing's, then the next. There's always a next. It's not always so cataclysmic, but there is always a next. 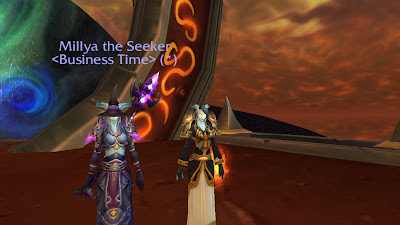 Lately, I've had the honor of raiding with Vidyala, Vosskah, Walks (of Apotheosis) and the other fine folks at Business Time. They've gone to Firelands with the intent of building Dragonwrath - and, we've finished. It's been successful. And to be complimented on my healing, has been an honor. One of their folks, Tass, has given me the greatest compliment I can't ever repeat, but, it feels damn good, to know that people I like raiding with, that I respect, hold me in the same kind of light.

In the writings that I share with my closest, Kara isn't the shy, reticent any more. She's a leader. Not a tactical one, but a personable one. She recognizes people are better than her at tasks, and she tries her best. Not to keep everyone happy, but to keep everything on rails, because, happy follows where consistent lives. She struggles with things, but, in my silly canon I keep for Waypoint in my head, she's a pretty okay leader.

And that's when I realized when Kara had grown to where she was happy, I had too.

That when she had grown to actually trust and have faith in herself, so had I. That, when you pull your nose out of the texts for a bit and see who you've surrounded yourself with, it can be really shocking when you don't realize how well you've done it.

As for now? I'll have faith. If not in a basement windchime, then in me.
Posted by Snack at 6:53 AM