There are a lot of emotional posts on the internet about 4.0.3a, the end of "Old Azeroth" and missing the sights and sounds of the world knowing that when the servers came back up today, the world would be alien, and new, and the joy of exploration would sink in again.

Other people have wrote those blogs, and they've wrote them better than I could.

For me, 4.0.3a brought us "remastered" versions of old dungeons, old favorites.

But one, you see, one stood the challenge of all challenges in front of me.

The enemy of enemies; the original "Feeds On Your Tears" encounter. 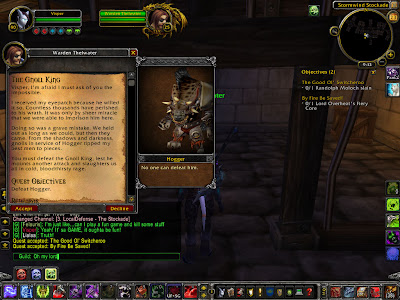 Fecal Matter has suddenly exeunt a state of philosophical rendering.


The Stockades are located (surprise) in Stormwind City, which makes things kind of tricky for Horde players - though, for low level characters, you should be able to use the "Looking for Dungeon" tool to get in there. There are two methods for Horde players to get INTO Stormwind City, both of which marked on the following map - with Cataclysm's release, you might be able to fly into the city itself.

Also, a warning: If you're a Horde player and your party dies, you will have a long run back to the instance from the opposite side of Elwynn Forest - play carefully, or hope for the best!

When you've accomplished that goal (which, really, is the hard part) you'll find yourself into the dungeon. And now, we can show off maps from inside as part of Blizzard's User Interface! YAY! 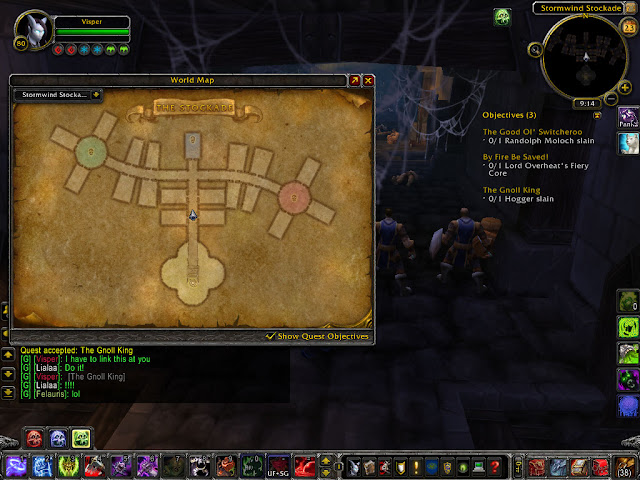 As far as dungeon crawling goes, this is a pretty simplistic dungeon - Stockades is a trio of hallways, acting as "dungeon wings" - there's three chunks, the Human Rioters, Riverpaw Gnolls, and Elementals.


The initial stretch into the dungeon is full of human enemies, who really don't have any special abilities. The enemies are varied - elite Rowdy Troublemakers and Shifty Thieves are mixed in with Petty Criminals.

The boss of the "Human Wing" is quite a dapper gent, however! 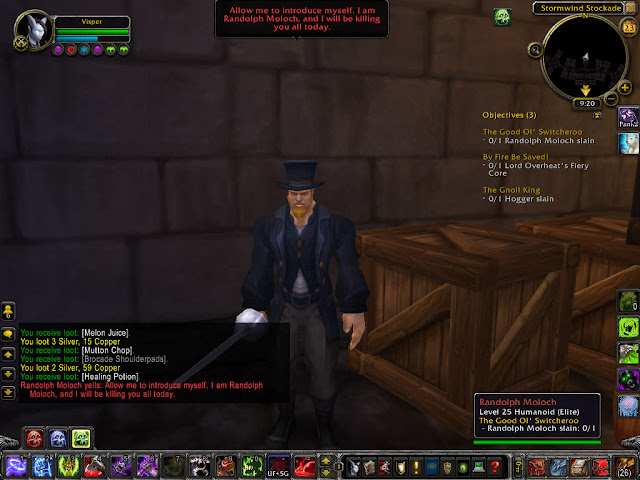 The quest to kill this gentleman, the riot instigator, is straight forward, as he's in the room straight ahead from the entrance.

His "Special Tricks" include a flurry of stabbing attacks, and a vanish ability that allow him to appear behind one of your party members, though he won't start doing this until he's around 40% health - if you've PVP'd or have played a Rogue, it will be familiar to you. While it's a low level dungeon, an unsuspecting tank could be surprised by this and lose a squishier member of their party if caught by surprise.


The second wing, to the right of the entry way, is full of Elemental enemies. 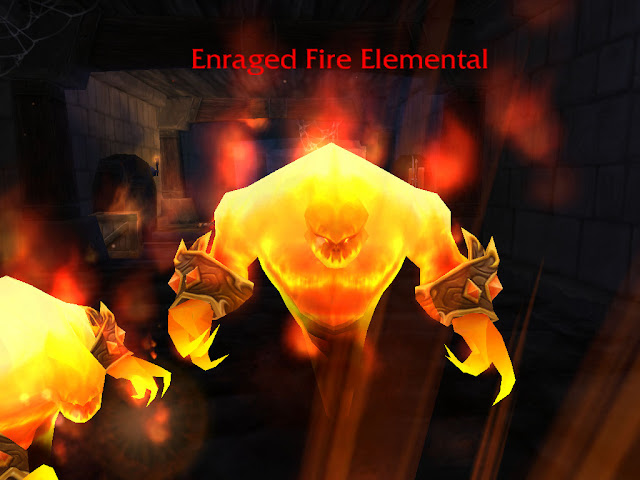 The enemies use, well. Magic. Fire magic. At the appropriate level for Stockades, you may not have much of a way to mitigate magic damage - but they cast infrequently, opting instead to hit you. The Fireball spell they cast can be interrupted though. (Examples, Shield Slam, Kick, Hammer of Justice)

The boss of the Elemental Wing is... 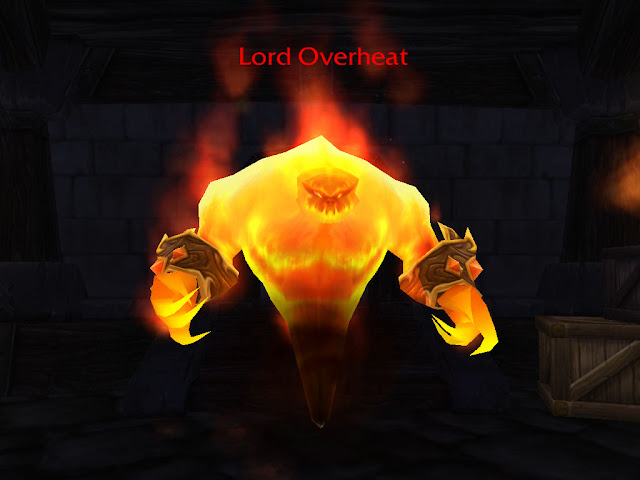 In addition to a Fireball spell (this one cannot be interrupted) he also has a Rain of Fire to damage everybody who would be standing close to the area of effect. He takes a lot of damage, and won't go down easily (if you've an "at level" party) because of a health pool of 15,250 HP.

Thankfully, his attacks aren't TOO hard hitting, so long as you have the right person up ahead, taking the beating.

Finally, you'll have the Gnoll wing. 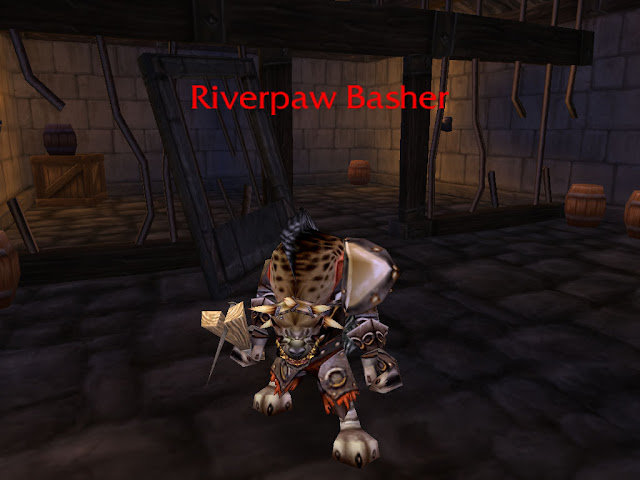 There are Gnolls, with clubs.

Some of them have BOARDS with NAILS in them. Left to their own devices, they'll likely build a board with a nail so large in it, it could DESTROY THE WORLD, but you won't cotton to that, because you are here to ADVENTURE and CHEW BUBBLEGUM, and you are all out of BUBBLEGUM and also you can't eat while in combat.

However, they're not just packing boards with nails in them, they've also Shaman casting lightning magic at you. 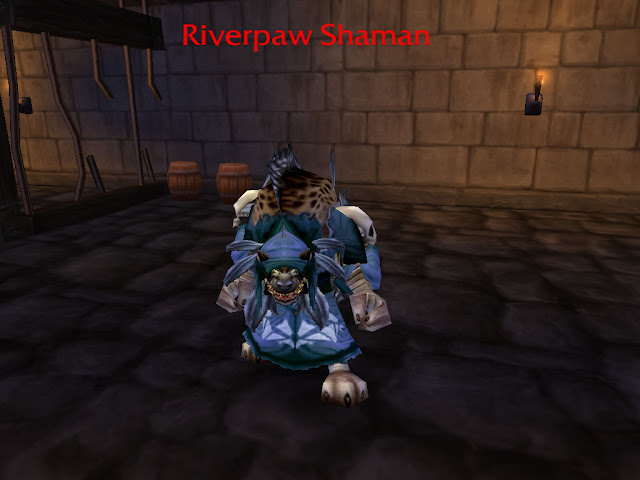 In addition to laughing like hyenas, they've also got lightning magic to cast at you - it's damage is classified as "Nature" damage, they'll come mixed in packs with the enemies who are going to bash you, so you'll want to focus on killing these guys first.


Finally, coming up to the destroyer of worlds himself! 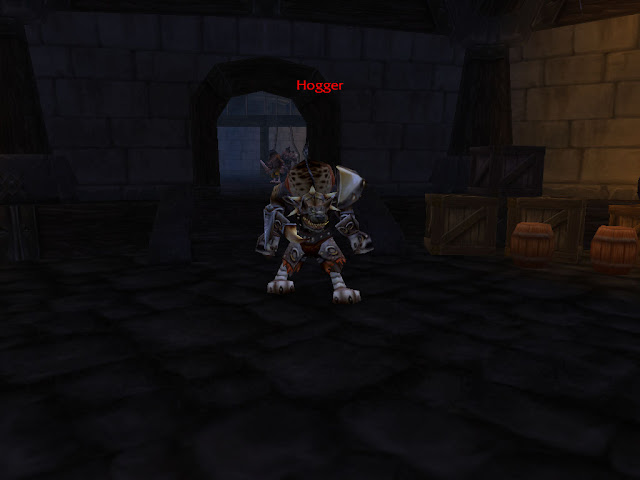 Hogger himself doles out physical damage - and has a couple of abilities, including an attack that inflicts a Bleed status ailment - the recipient loses 5% of their health every two seconds, making it a pretty painful hit to take at a low level. Even a high level character running the dungeon will see a significant part of their life bar shaved off with this - to get these pictures I ran a level 80 through here, and while taking 3-400 HP damage from bosses wasn't too bad, seeing six thousand HP drop off was fairly jaw dropping!

There's a surprising amount of good item drops from this dungeon now; but with the reworking and retooling of dungeons for Cataclysm, you might level past this area quickly, passing a couple of good blue-quality items.

A HUGE improvement over the original Stockades' "Kill some guys here" and no design on whether or not you're facing any kind of special enemy - much like a lot of the stuff that's been updated for Cataclysm, it's definitely an improvement!

I've had the opportunity to run a couple dungeons since, and it seems like we'll see a lot more "interesting mechanic" bosses at low level dungeons, though we'll have to see how that plays out with how fast people can level from 1 to 60 now.

New Old Stratholme is a phased instance now - defeating Balnazzar on "Live Side" (filled with the Scarlet Crusade) triggers the Argent Crusade pushing into the city: which prevents you from killing the Risen Swordsmith because... he doesn't spawn, because his hallway is filled with Argent Crusaders. If you're a completionist trying to do every quest in one run, you'll want to be wary for that.

Cataclysm's going to be awesome, and having a good chunk of the game (the new 1-60 content) now? It's done a lot to elevate the game from "I guess that'd be neat" to "OH MY GOD MUST HAVE" for a lot of players.

So much newness to see, though, it's easy to be overwhelmed by all of everything! So... take your time, and make sure you enjoy the ride!
Posted by Snack at 3:08 PM

Email ThisBlogThis!Share to TwitterShare to FacebookShare to Pinterest
Labels: because it is there, dungeon running, hogger, warcraft, WoW