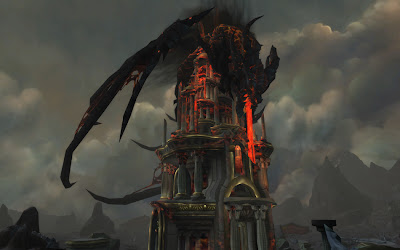 End Time
WHY ARE YOU HERE: The Infinite Dragonflight has been getting all up ins on Nozdormu's grill - and now the Aspect of Time has had it UP TO HERE with these pallet swapped dreggins.
The Infinite Dragonflight's leader, Murozond, is blocking up the pathways of time, preventing anyone from using time as it should be - which is troublesome, because the Dragon Aspects have this plan that kind of involves a bit of time travel to really put the screws to Deathwing.
NUMBER OF BOSSES: Five bosses total, you'll only fight three. Think like Trial of the Champion back in Wrath.
Mystery Pool - Of these four, you'll fight two, in one of the four Dragonshrines in Dragonblight. Nozdormu has a Chronothinger to take you to the four areas, so there's not a whole lot of travelling about. Each Dragonshrine has it's own amount of trash to worry about though.
Echo of Jaina - Fought in the Blue Dragonshrine; to force her to appear, you have to collect 16 fragments of her staff. The trash in this pack are ghostly beings, akin to the Halls of Reflection gauntlet in Wrath. Priests should be focused down, their Lightwells destroyed. Sorcerers can blink about, so if they can be silenced, do so. Riflemen and Footmen are the remaining trash - all classified as Undead, for you CC happy types (shackle undead, repentance, turn evil, etc)

Jaina herself has three major abilities to watch for:

Pyroblast - It's like fire, FOR YOUR FACE. If you're a tank. Uninterruptable.

Ice Blades - She'll blink away from you, and cast Ice Blades. Don't stand in them please. Immediately after, she'll cast Frostbolt Volley three times in quick succession, and this part CAN be interrupted! Please do, this hurts.

Flarecore - She'll create a small fireball on the ground; left to it's own devices it'll explode for lots of damage. If you step on it early, you'll take a chunk of damage, but it's much less worrisome.

She'll probably have time to cast Ice Blades at least twice, until you're in appropriate gear (i378, or Firelands equivalent) - when you might be able to push through the fight faster. A fairly anticlimactic fight.


Echo of Baine - Obsidian Dragonshrine houses Baine Bloodhoof, current leader of the Tauren people. He's mad, son. He has three packs of black dragons before him that you can safely avoid to get to the lava pool/platforms he's situated on. If you feel saucy and want to kill them, I recommend the drake first, as he'll spew lava on everyone, and it ratchets up in damage with the Black Dragon Seer's spellcasts (also interruptable).

Baine himself is a fairly simplistic fight:

Throw Totem - It's what it sounds? He'll throw a massive Tauren totem at you, knocking your character backwards - but, then you can grab the totem and throw it back at him, stunning him.

Pulverize - He'll jump to one of the rock islands, shattering it. You can't stand there any more, because the floor is lava. Pretend you're poor, and jump away to the nearest couch.

If Baine is allowed to chill in the lava, he gets a buff, allowing him to cast "Molten Blast" - it hurts like hell, don't let him stay in the lava. However, melee dps can hop in and out of the fire for the "Molten Fists" buff that adds fire damage to their attacks.

Yes, standing in the fire is a buff on this guy. I'm really getting mixed messages about things from Blizzard here.


Echo of Sylvanas - In the Ruby Dragonshrine, the Dark Lady of the Forsaken. Her trash packs are roaming Plaguebeasts, with Geists all about. They're not very avoidable - Geists have to die, first. FIRST. If the Plaguebeast dies first, the geists will eat it and hulk out, cleaving everybody and doing incredible amounts of damage. If you're healing, have a Cure Disease type button ready, or possibly prep to heal through a good amount of damage.

Sylvanas herself is fairly simplistic as well

JFC WHAT THE HELL IS THAT PURPLE CRAP - She'll make there be pools of purple on the ground. Don't stand in it, please.

Ring Around The Rosie - A circle of ghouls, linked by purple, will surround the fight area, and slowly advance  to the center. Standing in the purple will kill you - killing one of the ghouls will allow you to create a safe pathway to run through as the remaining ghouls finish their walk.

She'll set back onto the ground immediately afterwards, allowing the fight to continue. Keep moving, she'll lay down another line of purple fairly shortly afterwards. Continue to dps.

Echo of Tyrande - In the Emerald Dragonshrine, Tyrande is encloaked in Darkness - and you shouldn't be afraid of the dark, but rather, what's hiding in it: Tigers and Night Elven Sentinels. You won't be able to damage them effectively until you pull them into shafts of moonlight that'll make you run all the way around the lake, causing the shadowed figures to come into the light for being beat down.

Melee dps and tanks should stand up on the rock Tyrande's on, in the middle of the lake. Because of the Dark Moonlight, casters will see their cast times increased by standing IN the lake, and are probably well suited to stand on the edge of the lake, to avoid stuff.

Moonbolt - her primary attack, will knock a tank around to the tune of 37k - 43k damage.

As the fight rolls on, she'll also cast Lunar Guidance - speeding up her spell casting. The first cast will be when she reaches 80% of her life, the second at 55% of her life. And at 30%, she'll ramp up the damage with the Tears of Elune spell, turning the fight into a DPS burn phase. You can see where the tears are falling, and when capable, you should move out of the way too.

Note: Of these four bosses, only two will be encountered at a time. They mostly share a loot table, but each character has a special item from each of them. This may annoy you if you're looking for ONE PARTICULAR DROP, but this is the way RNG handled loot works.

Wait, why are we killing these four?
We don't know! Even Nozdormu is all "/shrug" about why they're here, though it's rumored that their presence suggests we can see big things from them in Azeroth's future.

FINAL BOSS: Murozond, Leader of the Infinite Dragonflight
After all your hopping shenanigans, Nozdormu can lead you to the Bronze Dragonshrine, where you'll fight Murozond's minions - two trash packs of four. The Suppressors need to be silenced, stunned, CC'd, because their spells will wreck people's day. The others are fairly simplistic (read: beat it to death).

Murozond is a dragon. A PROPER Dragon, not like those dragons we've been fighting all expansion. This is a dragon that if you stand on his ass, he'll tail whip you. If you stand in front of him, he'll roast you.

He also has a couple special abilities

Arcane Burst - Kind of like a mage's spell, but not really. Puts a stacking debuff on the player that increases the amount of damage they take.

Arcane Bomb - Again, like a mage spell, but not really. A circle of glowing will warn you to get out of the way of a bomb that'll make the ground dangerous to walk in - 25k damage per tick dangerous. As the fight continues, as his life gets lower, he'll set these faster.

But you get a special trick this fight, too:

Hourglass - Look at that beautiful Hourglass. Love it. "Why can't I hold all this damage done?!" your Recount will cry. Wanna meet dat hourglass.

Shortly after pulling Murozond, the fight will "snapshot" every player - and when you hit the Hourglass, it's like smacking the reset button - every player will "rewind" back to where they were snapshot, Murozond will be exactly where he was before you hit it, as he himself says: He is outside of time's influence.

The way we usually do the fight in Waypoint, is every 20%, we smack the Hourglass, then everybody unloads all their DPS cooldowns. If we've got it in group, this is also when we hit Heroism/Bloodlust/Beastlust/Timewarp as well: because after every Hourglass turn, your cooldowns are reset, your debuffs are removed, and timers act as if you never cast the spell at all.

We settled on "Every 20%" because at our gear level, it let us see the fight before we got comfortable with it - now, we'll let it roll and still have a couple charges on the Hourglass before we finish the fight.

So, why'd we kill Murozond?
The Leader of the Infinite Dragonflight, Murozond, is Nozdormu, the Aspect of Time! We see the "least worst" of all possible endings for Azeroth, with Deathwing having impaled himself upon Wyrmrest Temple - and Nozdormu, driven mad by the infinite of possibilities he sees, sets out to "fix" time in the way he thinks it needed to be, giving impetus to the Caverns of Time dungeons.

Killing Murozond opens up the Caverns of Time, allowing Nozdormu free reign over time itself again, so he can lead you into the next dungeon; the Well of Eternity.
Posted by Snack at 9:40 AM