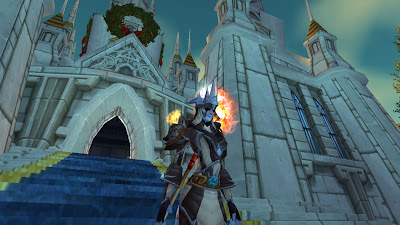 When it's a blast, it's a fun ride. When it's painful, it's like putting needles in your eyes. I've had absurd luck in winning loot rolls, but mostly, I treat it as a "pre-trainer" for the actual raid, and a good easy source of 500 VP early on in the week.

It allows me the opportunity to maybe flesh stuff out so I don't feel guilty rolling against my raid team for tier tokens and the such; spreading the upgrades about better. A 384 is fine, too.


For Christmas, my sister got me the Batman: Arkham City game. It's fun! It's like the old animated series we grew up watching, with the darker/edgier Christopher Nolan Batman seeping through it. (the number of returning VA help too)

Except, I feel bad for taking time away from playing World of Warcraft to play that instead. I feel like as a GM, I need to be prescient, I need to be seen AND heard often. I'm allowed to play other video games, but I always feel like, "You know, they probably could use one more for a dungeon, or you might have a JC cut they don't have..." while completely oblivious to the fact that I'm pretty easily reached.

I feel we'll see less people applying to actual raid guilds because of this. Not because "If this is what raiding is, man, EFF THAT NOISE" or because "I can do this AS MUCH AS I WANT" or even because of some misguided direction towards elitism: People who are not constantly motivated by loot want to see content. And when they've done it, they're done. That's good enough for them! They can focus on doing other stuff in game instead of finding a guild that matches their schedule, arranging their schedule to allow them to continue to raid uninterrupted, finding time throughout the week to finish their weekly dungeon chores so they can buy upgrades to be better at raiding, taking time to study boss strategies, to watch videos, to read about how to play their class wholly and completely to their best, gemming and enchanting with the GOOD STUFF, the expensive enchants...

What do you have as a guild manager, a recruiter, a raid team to offer someone like this? LFR isn't going away, think about how you recruit, think about what you have. It's been a recruit's market for a while now, and that is not changing any time soon. Adapt.


Sleep deprivation affects a lot beyond "oh I'm just sleepy" - in the workplace, it can cause a number of issues, especially if you are in the detail works of things. Handling of heavy equipment can be made dangerous, too, if your attention slips just a bit.

We raid in the evenings; and by time we get to raid, I've been up at least fourteen hours. It's made putting my thoughts together to speak clearly kind of tricky, and I've been a liability to my guild because of it. A couple people in guild have stepped up to make these calls, and I thank them for it every week, but I want to thank them again because it never feels like enough to just say "thank you" to them in game.


No matter who you are, what you do, it's very easy for "an internet thing" to explode into a "real life thing" in the ways that are bad, obviously, which is what I'm vaguely alluding to.

Be decent. You'll find it's a lot easier to get on with people if you're respectful, as if they were there with you. As if you were close enough for them to reach across the table and cuff you upside the ear for saying something offensive.

I equate dungeons to dungeons - in Final Fantasy, the most easily accessible boxes have small loot that's good for there and then (potions, tents, healing items) and to find the best stuff, you have to explore the space a bit. I know this was done in Wrath with heroic bosses being "off the beaten path" - and as their content was no longer relevant, it got harder talking people into going back in and doing those bosses. Or, their content was trivialized to the point of being irrelevant because of LFD's introduction, and Triumph badges for EVERY boss kill?


That's all I've got at the moment, nothin' detailed enough to be a full blogpost, but I felt like sharing. What about you? What's on your mind?
Posted by Snack at 4:45 AM